As a yoga and meditation teacher since 1973, I am getting many questions about why I’m talking about climate change and civic engagement these days instead of yoga poses and philosophy. To my mind addressing climate and being involved in our collective life is yoga! It’s taking yoga off the mat and into the world, seeing The One in The Many, which is the heart of the non-dual philosophy I’ve studied and taught. This perspective goes to the crux of the crises we are facing: thinking that we are separate beings rather different manifestations of One Spirit. We are in the midst of a tremendous shift in consciousness on the planet ~ from the love of power to the power of love. As Martin Luther King, Jr. says it so eloquently,
“It really boils down to this: that all life is interrelated. We are all caught in an inescapable network of mutuality, tied into a single garment of destiny. Whatever affects one directly, affects all indirectly. We are made to live together because of the interrelated structure of reality.”
I have loved yoga, and taught classes, workshops, and trainings for decades, and am now expanding to speak about one of the most urgent and serious issues of our time: climate change and how close we are to irreversible tipping points. I fully believe that yoga practitioners and all spiritual practitioners have immense gifts to offer this unfolding emergency: to honor the Earth, to show compassion for all creatures, especially those weakened by climate stress, and to be courageous in living the deep values of our One Humanity.
So, that said, here’s the latest on climate science …
A recently published study states that the world must set greenhouse gas emissions on a downward path by 2020, or risk not being able to contain the temperature rise within what is considered the safe limits of 1.5-2.0 degrees Celsius, according to the Paris Agreement.
To get a clearer idea of how much warming we’re talking about, convert the temperature in Celsius to Fahrenheit by multiplying the Celsius temperature by 1.8. So that 1.5-2.0 C becomes 2.7-3.6 F. That’s quite a bit warmer that many people may have realized.
One helpful way to get a handle on our climate situation is to consider our ‘carbon budget’, as reported in the Nature article noted above:
“The magnitude of the challenge can be grasped by computing a budget for CO2 emissions – the maximum amount of the gas that can be released before the temperature limit is breached. After subtracting past emissions, humanity is left with a ‘carbon credit’ of around 600 Gigatons (Gt).”
Clearly we are in a climate emergency of mammoth proportions and this should be an “all hands on deck” moment,
… but it isn’t.
This could be a time when the entire country comes together to address an enormous problem, that left unattended will ruin the lives of your children and grandchildren (and my niece and nephews, grandnieces and grandnephews and my new grandnephew born less than a week ago),
… but it isn’t.
Many scientists and researchers point out that we have the tools and the technology to shift from fossil fuels to renewables in time to avoid the worst damage of climate change. Mark Jacobson at Stanford University has a detailed plan for our country to get to net zero emissions that we could be following,
… be we aren’t.
This could be a moment that the entire country goes on high alert to address a major risk to the continuation of our civilization as we know it,
… but it isn’t.
It’s clear that waiting for the government to act will be too late, working alone will be too little, and the media has failed us by not reporting on the severity of the climate story.
Why aren’t we on high alert to this climate emergency?
So, it is up to each of us to get engaged in protecting Earth and our future! What can you, as one single person, do to make a difference? Here are some ideas to get you started: 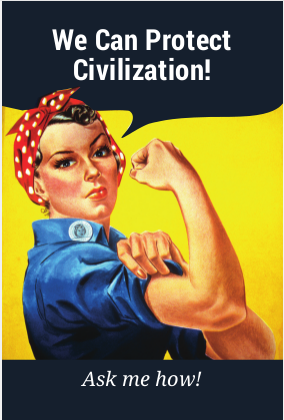 Finally don’t forget to take care of your most important asset: YOU!
Hold the most expansive perspective you can …  This is about a deep shift in consciousness, from seeing ourselves as separate individuals to being an integral part of the Web of Life, embracing our One Humanity.
“It is not given to us to know which acts or by whom, will cause the critical mass to tip toward an enduring good… We are needed, that is all we can know”.You were made for these times! You would not be here otherwise…
With love & appreciation for our Earth and all her inhabitants,