These were the words repeatedly spoken by George Floyd, while lying face down on the pavement, his hands handcuffed behind his back, as police officer Derek Chauvin pinned his neck to the pavement with his knee for 8 minutes and 46 seconds, killing him.  Clearly, he was of no risk to the officer who committed this heinous crime, or any of the other three policemen who were present.  This was a brutal, cowardly and criminal act.

Thankfully someone took a video of this incident… and it went viral.  People around the country and around the world erupted in outrage and fury over this clearly criminal behavior by the police.  People everywhere responded by taking to the streets to support Black Lives, policing reform, justice, and in honor of George.

Last Saturday, I participated in a peaceful march in Chapel Hill to honor George Floyd and the other Black Americans murdered by police.  It was led by the youth of the local NAACP chapter.  In the middle of the march we took a knee for 8 minutes and 46 seconds…  Thousands of people knelt together, of all ethnic backgrounds, all ages, all walks of life … participating together in a show of solidarity that this is not acceptable and this has to change.  I was moved to tears… 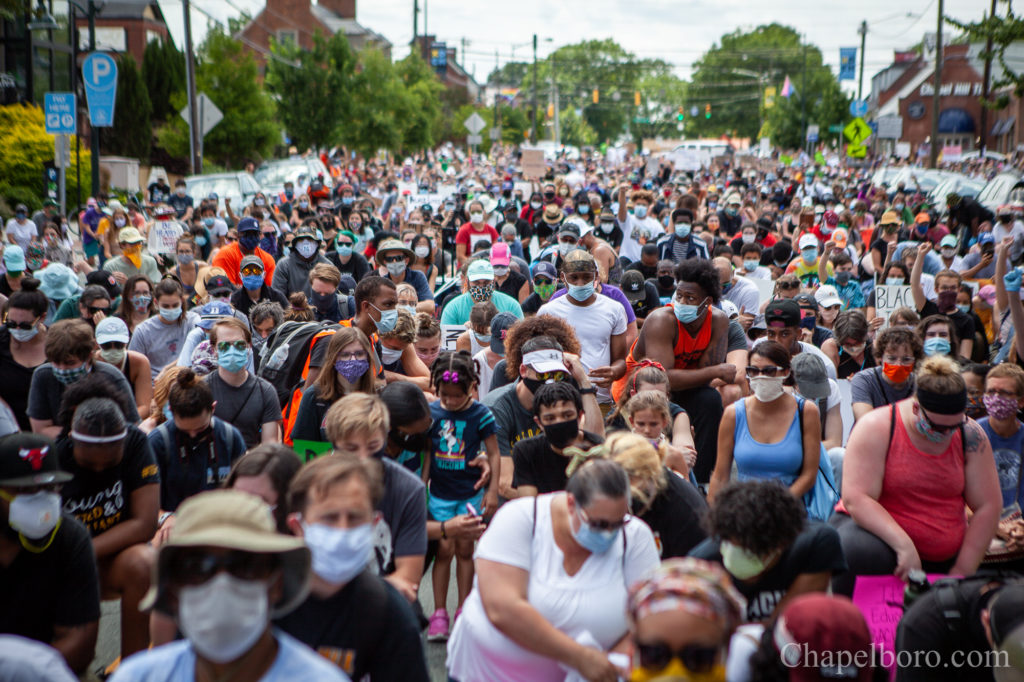 It is both mind-boggling and glorious to see pictures of thousands of protestors in Portland lying face down on Burnside Bridge to protest the injustice: 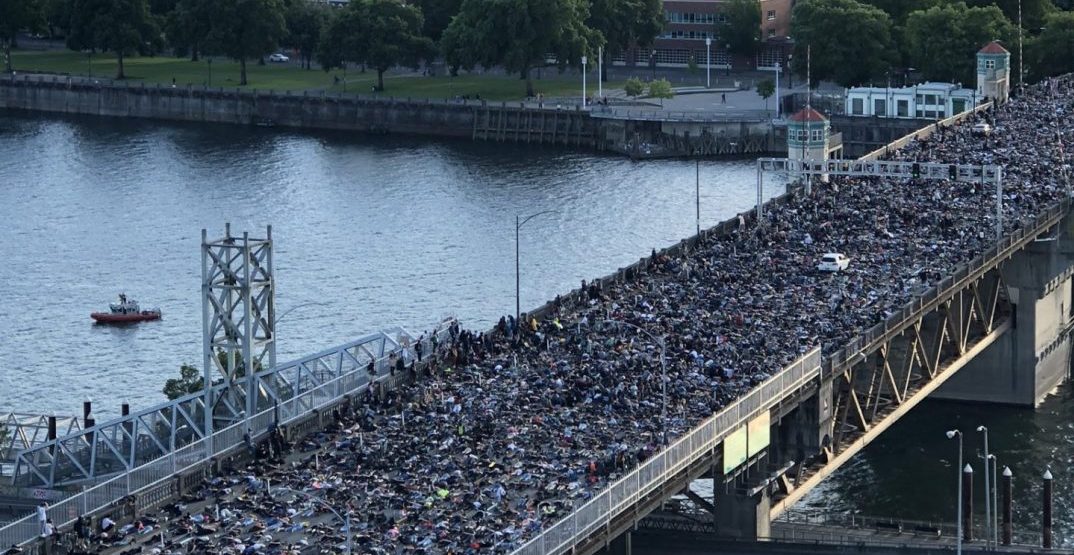 Particularly poignant are pictures of thousands of protestors

around the country and the world, lying face down on the pavement, with their hands behind their backs, for the 8 min, 46 seconds that officer Chauvin kept his knee on George Floyd’s neck.

This feels like a pivotal point in our history and that now is an inflection point in which real change is possible.  By confronting the violence of the police, we can begin to change the systemic racial inequality that oppresses Blacks and people of color.  Our country was built on the backs of Black people brought from Africa against their will and forced into slavery.  Our economy was built on this free labor that we as a country stole from them, and continue to do so with many low-wage jobs with no benefits.  Our country has never dealt with this fact, much less considered reparations for our Original Sin of slavery.

Right now, there is a window of opportunity opening wider than it ever has before … this is the time to step up, speak up, and participate in bringing forth the shift in culture of what is acceptable in how we treat people.  It is a truly historic time to be alive and to offer your contribution.

Spiritual teachers have been saying for decades that it will take enough hearts breaking open in compassion for the world to “wake up” and create a new culture of inclusiveness, justice, compassion, and peace.  It is what Joanna Macy calls The Great Turning.

And this is a stunningly heart-breaking experience for every human being with a moral compass to see the video of George Floyd being murdered in less than 9 minutes, before our very own eyes… by the knee of the police.

The Great Turning has started: be part of it!
The shift that is occurring is one of compassion,
of leading with the Heart.
Join the movement in your local community.

Make your voice heard and your heart felt!

The Protests are Growing Larger, Calmer, and More Community-Oriented, Vox reports on June 7.

This is a time of extraordinary transformation.  Open your heart and mind to what is possible and do everything you can to help create the world you want to give your children and grandchildren.

With compassion and blessings for our journey onward,

RESOURCES FOR UNDERSTANDING AND ACTION:

One of the clearest and most insightful perspectives I’ve heard about racism by Trevor Noah, on our social contracts.
Trevor Noah Breaks Down Reparations and White Privilege – Between the Scenes/The Daily Show.

Excellent article: 5 Ways White People Can Take Action in Response to White and State-Sanctioned Violence, from SURJ (Showing Up for Racial Justice)